On Christmas day, we set out walking from my house at mid-day, took some wrong paths, and ended up bushwhacking our way up to the Carretera d'Horta a Cerdanyola, running through the Collserola park. 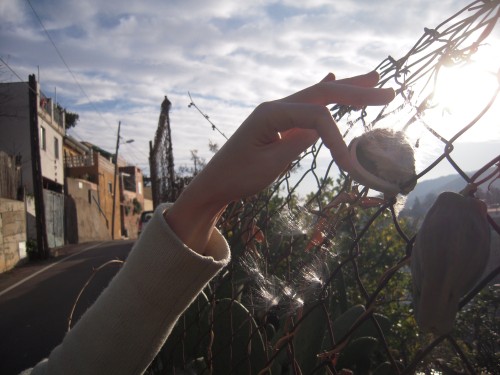 People that don't know Barcelona are often surprised about the map situation. See, Barcelona is a box, bounded on the bottom by the sea, on the left and right by rivers (the Llobregat and Besòs, respectively), and on the top by a chain of hill/mountains. All of the maps of Barcelona are this way, with the sea on the bottom. But this box is not oriented in cartesian coordinates: the mountains are actually west-northwest of the city.

Collserola is the name of the park encompassing the mountains. It's a beautiful park, and almost makes up for the city's lack thereof. Not many people walk there from their houses, but it's possible, especially if you don't go down the wrong road and decide to bushwhack up the hills.

Anyway, lovely times. After new year's, we decided to walk the other way, up to the hills of Badalona: 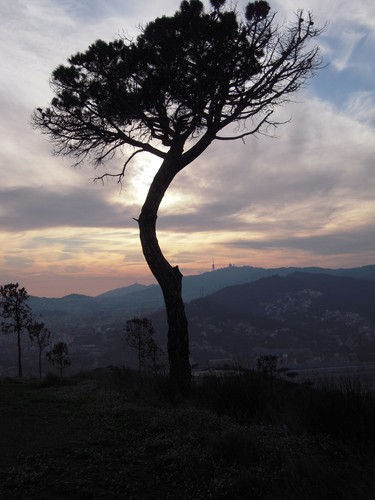 It's really wild to me that these places are within walking distance of my house. I feel nothing of the sage breeze when I'm down in Sant Andreu. In the states, I normally feel more connected with the natural world when I'm in a city like Portland, but the Barcelona abrupt-transition model does have the advantage that there are places without buildings within walking distance.

Happy new year! New years are times for gazing both navelward and to the horizon, and it's apropos to do a bit of both.

Last year was great. Work has been a privilege in many ways: in the possibilities to affect the future, to work with smart and polyfaceted people, and on the other hand to continue allowing me the time to be human.

Hackwise, 2008 was cornucopic. I wrote git-backed, purely functional weblog software in Scheme. I wrote a window manager. I wrote a lot about Guile, and integrated a VM and compiler into Guile itself. (The VM/compiler bits were extremely interesting, and educational.) And, guile-gnome-platform finally went stable.

I've been writing a lot, but I suppose if you're reading this you know that. All of the platitudes about "the process of writing actually forms ideas" apply. The decadence rant seemed to hit a nerve, although personally I have not done much to fix things. I wrote my first bit of fiction; I hope the fiction bug hits me more.

And in other facets, I got my black belt in aikido, travelled a bit, and finally settled down into a healthy relationship. 2009 is looking good. I suppose as a most minor resolution, this year I hope to waste less time on the internets, and to get more involved in local political action.

Thursday will mark my fourth year here in Barcelona. I had no intention of being here this long when I first came, after leaving Namibia to come work with Thomas, Wim, and Christian. It's been a great time.

I'm working elsewhere now, but I think that Fluendo was really formative in many ways. If I were to sum up the Fluendo experience, it would be in Christian's strange words: "de facto". Christian has always been a compelling storyteller, partly because of his booming voice that makes you forget what you were thinking. One of his huge successes was getting GStreamer described as "the de facto multimedia framework [on Linux]". Everyone uses that phrase now. And it's true: GStreamer really is the de facto framework, because of the fact that Fluendo paid us all to come work in one place, and we were able to concentrate on producing a well-designed, reliable piece of software.

Often people ask me how long I'll be in Barcelona. I used to say that I'd probably be back in the States after a year, but then a year would pass and I'd still be here, and so after a couple years of that, I stopped saying that I'd be back within a fixed period of time.

I do plan to go back one day, but that day is less immediate. Plus, I haven't owned a car for more than 6 years now, and having to do so would be a drag.

My present to 2009 is a comic my friend Laurel found. Ah, internets, release me from your clutches!