Hello! Is this dog? 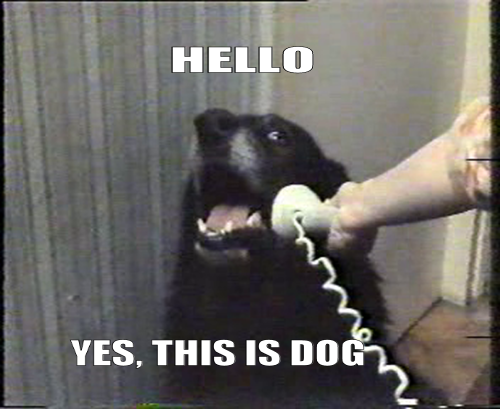 Hi dog this is Andy, with some more hacking nargery. Today the topic is generators.

By way of introduction, you might recall (with a shudder?) a couple of articles I wrote in the past on delimited continuations. I even gave a talk on delimited continuations at FrOSCon last year, a talk that was so hot that thieves broke into the the FrOSCon video squad's room and stole their hard drives before the edited product could hit the tubes. Not kidding! The FrOSCon folks still have the tapes somewhere, but meanwhile time marches on without the videos; truly, the terrorists have won.

Anyway, the summary of all that is that Scheme's much-praised call-with-current-continuation isn't actually a great building block for composable abstractions, and that delimited continuations have much better properties.

So imagine my surprise when Oleg Kiselyov, in a mail to the Scheme standardization list, suggested a different replacement for call/cc:

My bigger suggestion is to remove call/cc and dynamic-wind from the base library into an optional feature. I'd like to add the note inviting the discussion for more appropriate abstractions to supersede call/cc -- such [as] generators, for example.

He elaborated in another mail:

And you know, generators are indeed a very convenient abstraction for composing producers and consumers of values -- more so than the lower-level delimited continuations. Guile's failure to standardize a generator interface is an instance of a class of Scheme-related problems, in which generality is treated as more important than utility. It's true that you can do generators in Guile, but we shouldn't make the user build their own.

The rest of the programming world moved on and built generators into their languages. James and Sabry's paper is good because it looks at yield as a kind of mainstream form of delimited continuations, and uses that perspective to place the generators of common languages in a taxonomy. Some of them are as expressive as delimited continuations. There are are also two common restrictions on generators that trade off expressive power for ease of implementation:

With that long introduction out of the way, I wanted to take a look at the proposal for generators in the latest ECMAScript draft reports -- to examine their expressiveness, and to see what implementations might look like. ES6 specifies generators with the the first kind of restriction -- with external iterators, like Python.

Also, Kiselyov & co. have a hip new paper out that explores the expressiveness of linear-stack generators, Lazy v. Yield: Incremental, Linear Pretty-printing. I was quite skeptical of this paper's claim that internal iterators were significantly more efficient than external iterators. So this article will also look at the performance implications of the various forms of generators, including full resumable generators.

As you might know, there's an official ECMA committee beavering about on a new revision of the ECMAScript language, and they would like to include both iterators and generators.

For the purposes of ECMAScript 6 (ES6), an iterator is an object with a next method. Like this one:

Here, int_gen is an iterator that returns successive integers from 0, all the way up to infinity2^53.

To indicate the end of a sequence, the current ES6 drafts follow Python's example by having the next method throw a special exception. ES6 will probably have an isStopIteration() predicate in the @iter module, but for now I'll just compare directly.

Now, I don't think that we can praise this code for being particularly elegant. The end result is pretty good: we take a limited amount of a stream of integers, and combine them with a fold, without creating intermediate data structures. However the means of achieving the result -- the implementation of the producers and consumers -- are nasty enough to prevent most people from using this idiom.

To remedy this, ES6 does two things. One is some "sugar" over the use of iterators, the for-of form. With this sugar, we can rewrite fold much more succinctly:

The other thing offered by ES6 are generators. Generators are functions that can yield. They are defined by function*, and yield their values using iterators:

These definitions are mostly equivalent to the previous iterator definitions, and are much nicer to read and write.

I say "mostly equivalent" because generators are closer to coroutines in their semantics because they can also receive values or exceptions from their caller via the send and throw methods. This is very much as in Python. Task.js is a nice example of how a coroutine-like treatment of generators can help avoid the fraction-of-an-action callback mess in frameworks like Twistednode.js.

There is also a yield* operator to delegate to another generator, as in Python's PEP 380.

OK, now that you know all the things, it's time to ask (and hopefully answer) a few questions.

Of course, expressivity isn't the only thing. For iterators to be maximally useful they have to be fast, and here I think they could do better. Terminating iteration with a StopIteration exception is not so great. It will be hard for an optimizing compiler to rewrite the throw/catch loop terminating condition into a simple goto, and with that you lose some visibility about your loop termination condition. Of course you can assume that the throw case is not taken, but you usually don't know for sure that there are no more throw statements that you might have missed.

Dart did a better job here, I think. They split the next method into two: a moveNext method to advance the iterator, and a current getter for the current value. Like this:

I think it might be fair to say that it's easier to implement an ES6 iterator, but it is easier to use a Dart iterator. In this case, dart_fold is much nicer, and almost doesn't need any sugar at all.

To measure the overhead of for-of-style iteration, we can run benchmarks on "desugared" versions of for-of loops and compare them to normal for loops. We'll throw in Dart-style iterators as well, and also a stateful closure iterator designed to simulate generators. (More on that later.)

I put up a test case on jsPerf. If you click through, you can run the benchmarks directly in your browser, and see results from other users. It's imprecise, but I believe it is accurate, more or less.

The summary of the results is that current engines are able to run a basic summing for loop in about five cycles per iteration (again, assuming 2.5GHz processors; the Epiphany 3.6 numbers, for example, are mine). That's suboptimal only by a factor of 2 or so; pretty good. Thigh fives all around!

However, performance with iterators is not so good. I was surprised to find that most of the other tests are suboptimal by about a factor of 20. I expected the engines to do a better job at inlining.

One data point that stands out of my limited data set is the development Epiphany 3.7.90 browser, which uses JavaScriptCore from WebKit trunk. This browser did significantly better with Dart-style iterators, something I suspect due to better inlining, though I haven't verified it.

Better inlining and stack allocation is already a development focus of modern JS engines. Dart-style iterators will get faster without being a specific focus of optimization. It seems like a much better strategy for the ES6 specification to piggy-back off this work and specify iterators in such a way that they will be fast by default, without requiring more work on the exception system, something that is universally reviled among implementors.

It's tough to know how ES6 generators will perform, because they're not widely implemented and don't have a straightforward "desugaring". As far as I know, there is only one practical implementation strategy for yield in JavaScript, and that is to save the function's stack and the set of live registers. Resuming a generator copies the activation back onto the stack and restores the registers. Any other strategy that involves higher-level control-flow rewriting would make debugging too difficult. This is not a terribly onerous requirement for an implementation. They already have to know exactly what is live and what is not, and can reconstruct a stack frame without too much difficulty.

In practice, invoking a generator is not much different from calling a stateful closure. For this reason, I added another test to the jsPerf benchmark I mentioned before that tests stateful closures. It does slightly worse than iterators that keep state in an object, but not much worse -- and there is no essential reason why it should be slow.

On the other hand, I don't think we can expect compilers to do a good job at inlining generators, especially if they are specified as terminating with a StopIteration. Terminating with an exception has its own quirks, as Chris Leary wrote a few years ago, though I think in his conclusion he is searching for virtues where there are none.

dogs are curious about multi-shot generators

So dog, that's ECMAScript. But since we started with Scheme, I'll close this parenthesis with a note on resumable, multi-shot generators. What is the performance impact of allowing generators to be fully resumable?

Being able to snapshot your program at any time is pretty cool, but it has an allocation cost. That's pretty much the dominating factor. All of the examples that we have seen so far execute (or should execute) without allocating any memory. But if your generators are resumable -- or even if they aren't, but you build them on top of full delimited continuations -- you can't re-use the storage of an old captured continuation when reifying a new one. A test of iterating through resumable generators is a test of short-lived allocations.

I ran this test in my Guile:

I get the equivalent of 2 Ops/sec (in terms of the jsPerf results), allocating about 0.5 GB/s (288 bytes/iteration). This is similar to the allocation rate I get for JavaScriptCore, which is also not generational. V8's generational collector lets it sustain about 3.5 GB/s, at least in my tests. Test case here; multiply the 8-element test by 100 to yield approximate MB/s.

Finally, while I enjoyed the paper from Kiselyov and the gang, I don't see the point in praising simple generators when they don't offer a significant performance advantage. I think we will see external iterators in JavaScript achieve near-optimal performance within a couple years without paying the expressivity penalty of internal iterators.

Catch you next time, dog!