A recent post looked at what V8 does with a simple loop:

It turns out that calling f actually inlines g into the body, at runtime. But how does V8 do that, and what was the dead code about? V8 hacker Kasper Lund kindly chimed in with an explanation, which led me to write this post.

When V8 compiled an optimized version of f with g, it decided to do so when f was already in the loop. It needed to stop the loop in order to replace the slow version with the fast version. The mechanism that it uses is to reset the stack limit, causing the overflow handler in g to be called. So the computation is stuck in a call to g, and somehow must be transformed to a call to a combined f+g.

[Ed: It seems I flubbed some of the details here; the OSR of f is actually triggered by the interrupt check in the loop back-edge in f, not the method prologue in g. Thanks to V8 hacker Vyacheslav Egorov for pointing this out. OSR on one activation at a time makes the problem a bit more tractable, but unfortunately for me it invalidates some of the details of my lovely drawing. Truth, truly a harsh mistress!]

The actual mechanics are a bit complicated, so I'm going to try a picture. Here we go: 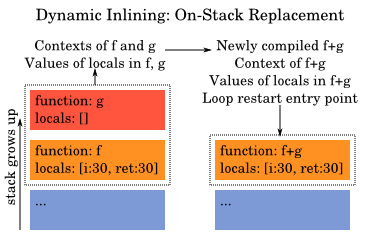 As you can see, V8 replaces the top of the current call stack with one in which the frames have been merged together. This is called on-stack replacement (OSR). OSR takes the contexts of some contiguous range of function applications and the variables that are live in those activations, and transforms those inputs into a new context or contexts and live variable set, and splats the new activations on the stack.

I'm using weasel words here because OSR can go both ways: optimizing (in which N frames are combined to 1) and deoptimizing (typically the other way around), as Hölzle notes in "Optimizing Dynamically-Dispatched Calls with Run-Time Type Feedback". More on deoptimization some other day, perhaps.

The diagram above mentions "loop restart entry points", which is indeed the "dead code" that I mentioned previously. That code forms part of an alternate entry point to the function, used only once, when the computation is restarted after on-stack replacement.

Given what I know now about OSR, I'm going to try an alternate decompilation of V8's f+g optimized function. This time I am going to abuse C as a high-level assembler. (I know, I know. Play along with me :))

Let us start by defining our types.

All JavaScript values are of type Value. Some Values encode small integers (SMIs), and others encode pointers to Object. Here I'm going to assume we are on a 64-bit system. The data member of Object is a tail array of slots.

Values that are Object pointers have 01 as their least significant bits. We have to mask off those bits to get the pointer to Object.

Numbers that are not small integers are stored as Object values, on the heap. All Object values have a map field, which points to a special object that describes the value: what type it is, how its fields are laid out, etc. Much like GOOPS, actually, though not as reflective.

Indeed, the offset into the root pointer is negative, which is a bit odd. But hey, details! Let's add the functions to actually get a double from an object:

I'm including double_to_obj here just for completeness. Also did you enjoy the union literals in this block?

So, we're getting there. Perhaps the reader recalls, but V8's calling convention specifies that the context and the function are passed in registers. Let's model that in this silly code with some global variables:

Recall also that when f+g is called, it needs to check that g is actually bound to the same value. So here we go:

Finally, f+g. I'm going to show the main path all in one go. Take a big breath!

And exhale. The receiver object is passed as an argument. There are five stack slots, none of which are really used in the main path. Two locals are allocated in registers: i and ret, as we mentioned before. There's the stack check, locals initialization, the check for g, and then the loop, and the return. The first test in the loop is intended to be a jump-on-overflow check.

In the original version of this article I had forgotten to include the interrupt handler; thanks again to Vyacheslav for pointing that out. Note that the calling the interrupt handler in a loop back-edge is more expensive than the handle_overflow from the function's prologue; see line 306 of the assembly in my original article.

But what about OSR, and what's that label about? What happens is that when f+g is replaced on the stack, the computation needs to restart. It does so from the osr_after_inlining_g label:

Here we take the value for the loop counter, as stored on the stack by OSR, and unpack it so that it is stored in the right register.

Unpacking a SMI into an integer register is simple. On the other hand unpacking a heap number has to check that the number has an integer value. I tried to represent that here with the C code. The actual assembly is just as hairy but a bit more compact; see the article for the full assembly listing.

The same thing happens for the other value that was live at OSR time, ret:

Here we see the same thing, except that additionally there is a check for -0.0 at the end, because V8 could not prove to itself that ret would not be -0.0. But if all succeeded, we jump back to the restart_after_osr case, and the loop proceeds.

Finally we can imagine some deoptimization bailouts, which would result in OSR, but for deoptimization instead of optimization. They are implemented as tail calls (jumps), so we can't represent them properly in C.

I think I've gnawed all the meat that's to be had off of this bone, so hopefully that's the last we'll see of this silly loop. Comments and corrections very much welcome. Next up will probably be a discussion of how V8's optimizer works. Happy hacking.