One of my first tasks at Oblong was to migrate their code for playing video from some very tricky, threaded ffmpeg + portaudio code to using GStreamer. The playback interface is fairly standard, but thorough: seeks to time, segment seeks, variable speed and reverse playback, frame stepping, etc. There were some twists: we do colorspace conversion on the GPU, and there's a strange concept of "masks", which is useful for operating on rotoscoped video, and there's integration with the GL main loop.

But anyway, I felt finished with all of that a while ago. The only problem was a lingering memory leak, especially egregious in the context of the art installation, which has yet to switch to my code.

So it was with a queasy, helpless feeling that I sat down and tried to systematize the problem, come up with a test case, and see if I could track down where the leak was. I tried code inspection at first, and I proved my code correct. (Foreshadowing, that.) I at least narrowed down the situations under which it occured. I then despaired for a while, before I hit on the way to make memory leak detection fun: turn it into a tools problem. Now instead of finding the leak, all I needed to do was to find the leak detector!

So I checked out valgrind from CVS; it crashed on me. Then I decided to see if libc had anything to offer me; indeed it does, mtrace. But alack, deadlocks. I even went so far as to include mtrace in my code, and applied Jambor's patch from the bug report on my sources, but lost because the ELF symbol resolution is intertwingled with libc's build system.

So back to valgrind, this time the 3.2.3 version packaged with Fedora, and lo and behold, exhibit A: 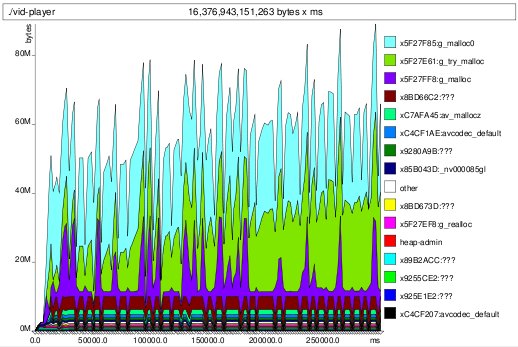 houston, we have a leak

For that, you have to dive into the textual output produced by massif. And sure enough, following things back far enough, you find that it is a GStreamer video buffer:

For this level of information, you have to run massif with special options. I ran my test like this:

So now that I knew what was leaking, I decided to run with fewer, longer cycles to see the allocation characteristics were. And thus, exhibit B: 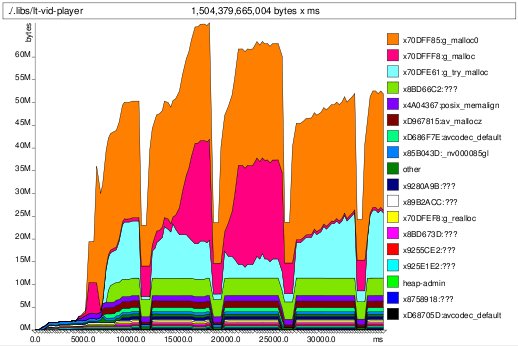 You can see that after the video was removed from the scene the cyan part representing g_try_malloc allocation does not drop down to zero; indeed it starts to "fill up the trough", getting larger at each iteration.

Of course at this point I realized that I probably wasn't freeing the buffer that I kept as a queue between the GStreamer and GL threads on teardown. Indeed, indeed. Two lines later and we have the much more agreeable long-term plot: 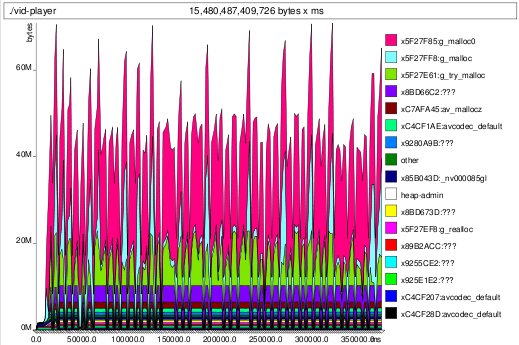 Valgrind turned out to be much more useful to me in this instance than it was when I looked at before, when hacking Python. But again, the CVS/3.3 version was of no use, yet. Since then, 3.3 does indeed do graphs again, but in ascii. As a palliative, the textual output appears to have improved. Still, ascii graphs?